When your English Professor Reviews your Book! 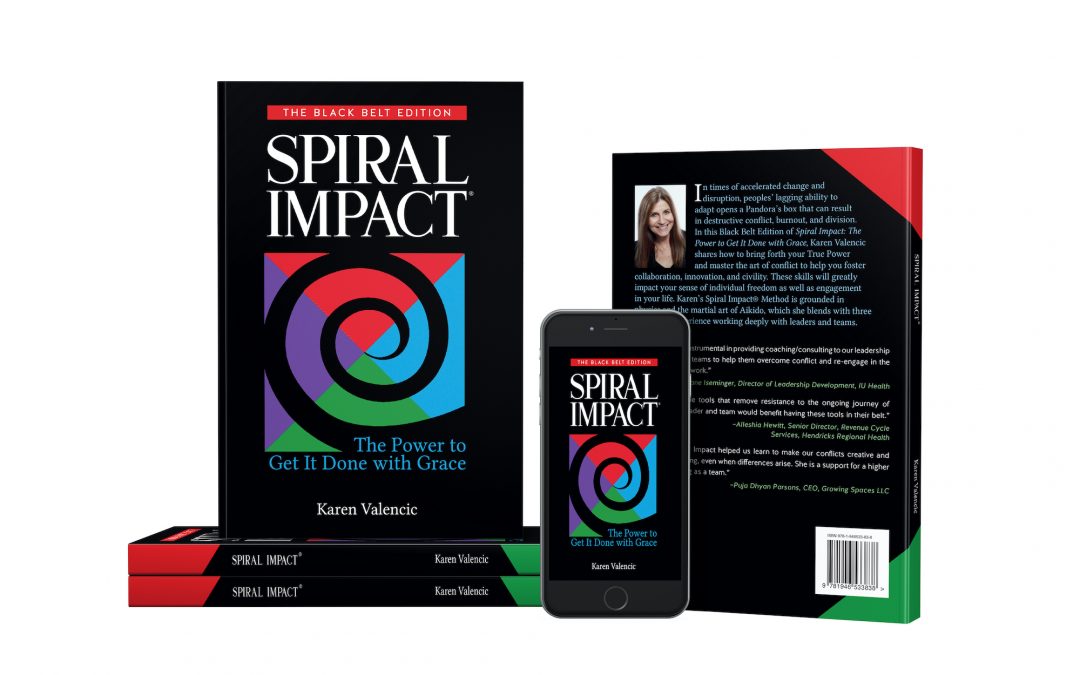 A very special thank you to Dr. Tierney for a deep, insightful, and educational review of the Black Belt Edition of Spiral Impact!

Baldassare Castiglione in his influential Book of the Courtier (1528) wrote the sophisticated “conduct book” for the lords and ladies of the Renaissance. The form was basically a conversation among a group of those assembled in the outstanding Ducal Palace in Urbino, Italy on the topic of what ought to be the characteristics and accomplishments of courtiers and courtesans (at the time this simply meant the women of the court).

One of the essential characteristics was deemed to be sprezzatura, essentially grace under fire. An English synonym is “nonchalance.” It was defined in my online A dictionary as “The art of performing a difficult task so gracefully that it looks effortless.”

Mechanical Engineering alumna of now Trine University (1979), Karen Valencic has updated sprezzatura for our times, at a time when our times need more courtly behavior, not just in the upper echelons of politics or board rooms, but also for mid-level managers, committee heads as well as those who work out in the shops. But, importantly, for all the rest of us as human beings in our relations with others.

The great poets Wordsworth and Coleridge, who joined forces to publish the Lyrical Ballads, an early force in the Romantic period, both spoke with praise of the power of bringing disparate things together.  One called that the esemplastic power (Wordsworth, I think) and the other called it the coadunitive power. The effect of such joining was one of surprise and/or satisfaction.

Karen Valencic demonstrates that power in her book in numerous ways.  One is her chief methodology:  she joins insights from her engineering education with her long-term practice of the art of aikido. In bringing these together she creates memorable lessons about how to conduct ourselves for maximum impact in this oh-so-distant world of not so courtly behavior. The good thing is you don’t have to be a practitioner of engineering or physics or aikido to benefit from these lessons.

She joins her learned concepts with concrete examples of people she has worked with and coached on various dysfunctional business and personal situations.  She has consulted with numerous businesses and corporations and succeeded in easing conflicts and making teams more productive. You’ll get plenty of examples in her book http://www.amazon.com/dp/1946533831or online at www.spiralimpact.com.

Spiral Impact is a quick read but chockful of helpful tips for working together and encouraging others to do the same, especially if you do not live in Urbino (where the formidable ducal palace still survives), but in Hometown, U.S.A., whether that is D.C., or Mongo, IN, or anywhere in between.  I like the fact that in her examples she talks about some of her own faux pas.  As she notes “Adding even a little heat to a tinderbox can ignite a raging fire.”  She admits to having “set some accidental fires” herself.  She has learned from them, and so can we.

When I had first given a quick run-through of her book, I emailed her and said it sounded like it was perfect that the book would appear before Thanksgiving and Christmas holidays, where I thought at the time families would be gathering but huddled in their separate political silos plotting to trebuchet cows into opposition silos (think Monty Python and the Holy Grail). She posted some helpful advice for family gatherings in “Courageous, Crazy or Curious? Your choice for the Holidays.” The pandemic has reduced the number of family interactions and, no doubt, freed up the market for trebuchets.

If you aren’t blessed with a touchingly sensitive gift of tact, as few of us are, she reminds us on several occasions that taciturnity (keeping your mouth shut) can be extremely effective in maintaining good relations with employers, employees, friends, and, yes, family. Or, if you must speak, she recommends asking questions in lieu of smashing hardball assertions over the net. Be genuinely curious how the opposition arrived at their positions. The root of “curious” is shared by “curator” (who cares for the art collections), “caring,” and “curing.” This curiosity itself can be a soothing and a healing palliative.

Raving Stentors (in The Iliad, Stentor has the volume of 50 men) may be good for issuing commands and communicating above the din on the battlefield, but they can turn your personal ducal palace or your business into a battlefield. People may forget the yelled message over time; they don’t forget the yeller.

So, protect yourself, garner more productivity and successes without filling up a gallery of enemies. This definitely does not mean to be a softie. It means physically and strategically using a different approach. Spiral Impact: The Power to Get It Done with Grace has all the moves.