When a choice is between you or me,

look for way to explore us – the relationship itself. 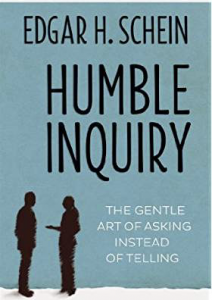 Asking questions is an important part of my Spiral Impact® methodology. I find Schein spirals in and elaborates about questions in deep ways. He points out that we live in a culture of telling and tasks. As our work changes and becomes more complex and the culture becomes more diverse it requires more relationship building to truly understanding others.

Humility, in the general sense, refers to granting someone else a higher status than one claims for oneself.
Humiliated means publicly deprived of one’s claimed status, to lose face.

Schein defines “Humble inquiry as the skill and the art of drawing someone out, of asking questions to which you do not already know the answer, of building a relationship based on curiosity and interest in the other person.”

Four forms of inquiry, all of which can be humble depending on the intent:

1. Humble inquiry – maximizes my curiosity and interest in the other person I set aside my bias.

2. Diagnostic inquiry – influences the other’s mental process, example: what may have caused this?

3. Confrontational inquiry – you insert your own ideas in the form of a question, “example, do you think they were doing that because they were afraid?

Keys to learning are to slow down, observe carefully, and take full stock of situational reality – becoming more mindful.  Ahh…YES!