How can a healthy woods or forest help us understand high-functioning teams and the great resignation?  A healthy forest has a diverse species of trees, bushes, and ground cover growing with some friendly competition to keep all healthy.  It is sustainable and regenerates itself naturally. However, the biome, or a team culture, can be overtaken with dominating invasive species, such as Honeysuckle in the midwest or Kudzu in the south, that choke out diversity and prevent anything else from growing.

On a team, honeysuckle represents a dominant unchecked personality.  Unless culture is clearly defined, work cultures are defined randomly by that dominant personality.  That’s where things can get ugly – people disengage or leave, productivity sinks, some  organizations even fail.   Culture is a living energy that is experienced by all who encounter it – positive or negative!

I see The Great Resignation as a great reveal of those areas of discontent that result from not having the space to be healthy, contribute their best, and offer a path for growth. Much of what I do in my practice of leadership and team development is assist teams in defining or redefining their culture.  I call it team development rather than building because it is establishing consciously the framework of a culture they want.  It addresses deeply the desired culture they’d like to create, and creates structure and tools to maintain it.

Just like removing honeysuckle, team development requires ongoing attention and removal.  It’s a long game.  How do teams get overwhelmed with honeysuckle?  Here are a few examples, I’ve witnessed:

Some people seen as high-performing individuals may appear as invaluable to a team; others defer to them.  Sometimes these individuals ‘block’ others’ performance.  Blockers are not invested in helping others grow and almost invisibly hold others back.  As the team defines the culture, blockers are revealed and will often depart.  I’ve witnessed many times when the blocker leaves the performance of the team elevates!  If you have a superstar on your team, ask yourself if they are contributing to bringing up others.  Remember healthy forests are regenerative!

As an external consultant bound to confidentiality, team members mostly feel pretty comfortable sharing with me.  What I often find is people have brought up issues with leadership and it appears that leadership does nothing.   It appears there are unfair things going on the team.  It takes a lot for many team members to say something that may sound like complaining. Sometimes this is due to privacy laws other times a leader just doesn’t think it is that big of a deal.

When nothing happens it becomes a pressure cooker for those individuals.  This is the ultimate of honeysuckle snuffing out a species that adds value.

If leadership above the team isn’t aligned and respectful of the direct leader/manager of the team and allows others to go around the direct leadership, honeysuckle will prevail.  While competing agendas between operations, finance, and human resources are natural and important they must have some alignment and respect of culture.  If the C-Suite hasn’t done their own culture-defining, it’s an invitation for honeysuckle!

Start-up companies are particularly vulnerable to a honeysuckle culture.  By nature, the personalities who come together for a startup are very different from those of a thriving mid -sized organization.   They tend to attract fast-moving dominant energetic personalities.  Much like a rocket, a startup needs a lot of energy to blast off!  As they become more established in the day-to-day operation boredom can set in, unleashing destructive conflict. However, I’ve observed so many times, those fast energetic people continue to hire people just like themselves!  When what they need are diverse talents that are comfortable with the monotonous process of growth.  Start-ups don’t tend to want to spend resources on something like culture they cannot see.  In the long run, that lack of attention to culture costs is very pricey.  Remember healthy forests have diversity!

‘The Great Reveal’ is exposing leaders’ and organizations’ blind spots in their communication, compassion, and culture.  If you are experiencing a great resignation – it’s time to do the essential work of identifying and cutting out the honeysuckle.  This isn’t a one and done process; you must continue to stay close and watch – honeysuckle will find any opening!

In a my recent livestream I shared a story I’ve not shared widely from my past. It illustrates a Great Reveal from my past!  Feels like the right time to share.  I begin the story at 2 minutes 45 seconds. 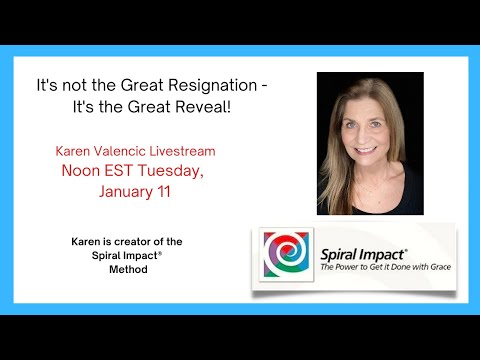